Joined 6 mo ago
·
193 Posts
I asked my buy back contact about the cold weather update and she told me anything beyond the "fix" is between me and the dealer. The same dealer that told me they didn't have a Bolt certified mechanic.

Joined 7 mo ago
·
13 Posts
The only thing about this battery recall stuff that bothers me is the amount of email and snail-mail I'm getting from GM, asking me to take it in for recall service. I activated the hill-top reserve, I doubt it's going to turn crispy any time soon. I would have to drive 50+ miles to the nearest Chevy dealer that has a Bolt certified mechanic, (probably some computer geek with a laptop!) and probably wait around there for 2-3 hours for the scheduled 45 minute service. Thanks but no thanks, GM. I have better things to do with my time.

. I remember the GM pickup side mounted gas tank 'fix', $1000 off an GM product that was not a Saturn or a Chevyzuki (Geo Tracker 4x4). I owned one of those pickups, a 78 3/4t Chevy. Although I never was traumatized by owning and driving that pickup, I was rather nonplussed by the 'settlement'. The lawyers that brought the class action suit to the courts made out like bandits. I had just bought a new car and wasn't even close to needing another car at that time. Even though the certificate was transferable I decided to toss it since no one I knew at the time was interested in using it. A testament to the quality of product for GM back in the mid 90's.

The only other class action lawsuit I was part of for an auto was VW's 'dieselgate' debacle. I bought a brand new 2013 VW Jetta TDI Premium. Nice car, and I wish I still had it. I told everyone I know that this would be the last car I'll ever own. Since I was well into my 60s at the time, and I only drive about 700 miles per year it seemed safe to think that. Just doing the math I think I'd have to make it to 90 to get a full 200k out of that Jetta.

Then came the bad news in summer of 2016, VW had gotten caught cheating on the diesel emissions. Over on TDI Club forums the speculation quickly ramped up about the fix, which everyone assumed was going to hamstring the TDI cars 32-35mpg range, and for VW to put some money in your pocket to help pay for the extra fuel burn. I averaged 40.1mpg over 3.5 years & 24,000 miles, and not one problem. When the 'fix' was announced it stunned quite a few people, including myself. You could either keep the car, get some money and wait for the fix, and subsequent loss of mpg, or sell back to VW. VW posted a spreadsheet a few weeks after the announcement. I paid $24,974 OTD, and VW was offering me $25,925 to return it to them, or $6200 to keep it and get the fix. I'm no dummy, I took the $25k. I mean, ****, they're offering me almost $1k more than I paid OTD? I get 24k miles for better than free? Well, Okay!

I liked the TDI well enough to buy another one. It's a 2013 WV Golf. It gets 41+mpg in stock form. I don't drive it much since the Bolt has such great range. I routinely go 100 miles round trip taking my younger brother to some of his Dr. appointments. At 90% charge I'm still left with anywhere from 70-90 miles of range left.

Shortly after I sold the Jetta back to VW, I bought a used/off lease Nissan Leaf SL, the TOTL Leaf for 2012. I'd always wanted an all-electric. The Leaf was a hard lesson in EV's in terms of range. I live in a somewhat remote area in a town of 7k people. I started feeling like I lived on a island! While I could go 22 miles west to an adjacent town I didn't often have a good reason to. And the town 25 miles to the east was something of a stretch, I got range anxiety every time I went there. I'd get home with as low as 5-10 miles left on the GOM. Not good, and forget it in winter if I wanted to stay warm doing it. It wasn't going to happen. After almost 3 years of owning that car I sold it, and got back all but $800 of the $9200 OTD I paid for it! It was a well appointed car, but why would you need a navigation system with such a short range? After a full charge on the Leaf I would see anywhere from 70-75 miles of range. The only way I could get that kind of range is to drive at 25-40mph. Drive anywhere in my town for longer than 3 miles and you're on 60mph roadway.
L 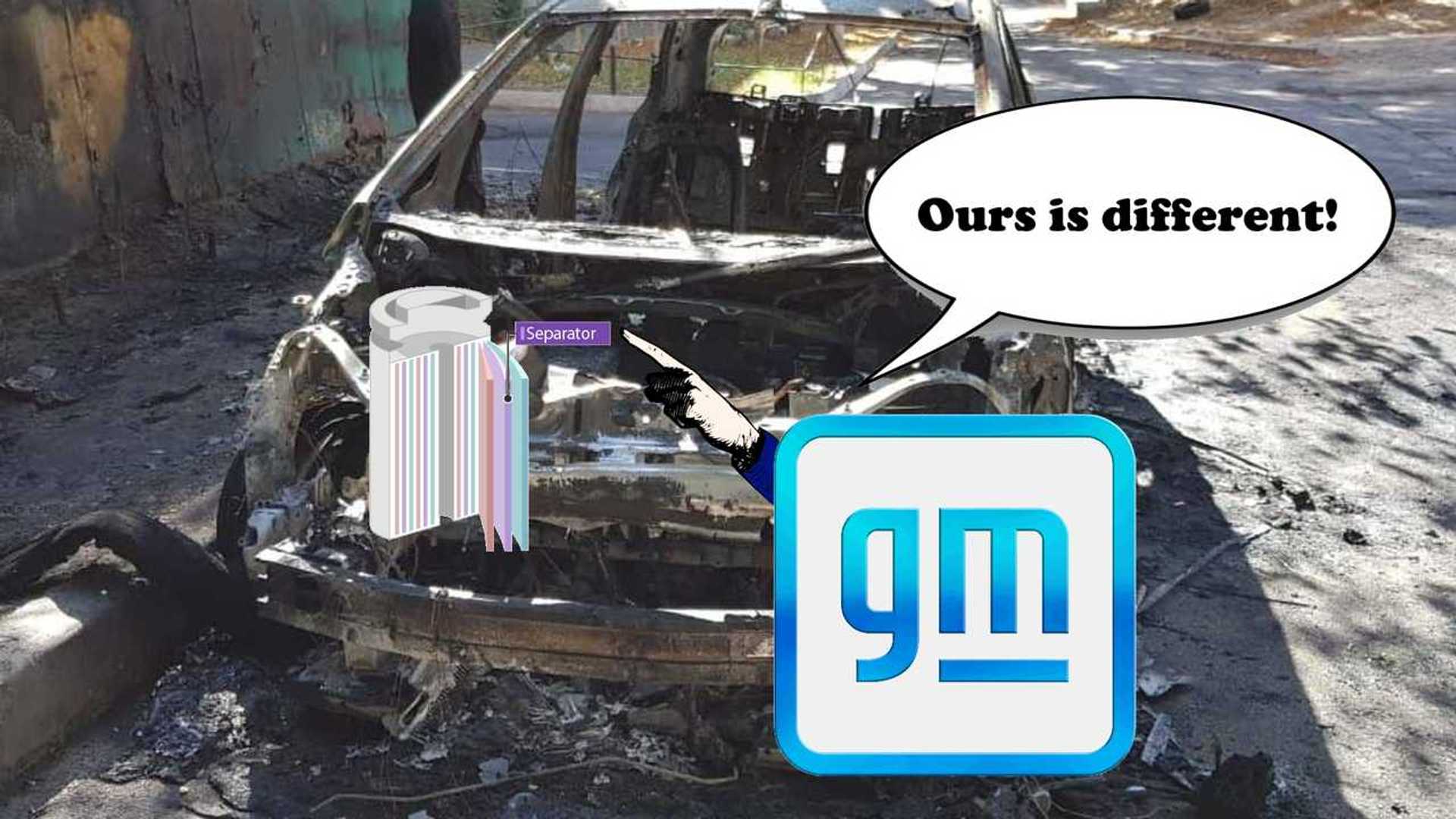 GM’s word about the Chevy Bolt EV’s software update fix is that it does not have the same cells in the Hyundai Kona Electric: the separator is different.

UnAlpine said:
I will most certainly have that "fix" applied in April, assuming I still have this Bolt at that time. I just would not accept that as a "final fix". The battery would still potentially have the same issue, which could become a problem at any time. The April fix only helps in terms of fire prevention.
Click to expand...

I'm with you on that. Gets the range back and it sounds like only diagnostic software but they may have identified, by studying those damaged cars, some specific thing(s) to watch for and then GM and/or the owner will be notified to go to the dealer for some module replacements. Presumably with the parts from Michigan.
M

XJ12 said:
What if the software counts the number of cycles to 100% with a finite limit. Or gives unlimited 100% charges but prevents charging to 100% if the battery temperature exceeds a predetermined threshold? Just throwing out some random thoughts on the subject.
Click to expand...

Sorry but I think that "what ifs" are an endless loop and not worth the time to dream them up.

Joined 6 mo ago
·
193 Posts
Well, I got a surprise call. I thought with the solution roll out date of April my conversation with GM about buying back my Bolt was over. Nope, they just called and are planning on presenting my options by the end of this week.
We'll see what they offer.
A

Jerry Duke said:
Well, I got a surprise call. I thought with the solution roll out date of April my conversation with GM about buying back my Bolt was over. Nope, they just called and are planning on presenting my options by the end of this week.
We'll see what they offer.
Click to expand...

Hi Jerry .. what state are you in?

Joined Jul 25, 2019
·
70 Posts
At the same time, Hyundai has decided to replace all batteries...
Makes one wonder why GM decided otherwise...

TheCyberKnight said:
At the same time, Hyundai has decided to replace all batteries...
Makes one wonder why GM decided otherwise...
Click to expand...

Because the batteries and packs are different?
T

shocker said:
Because the batteries and packs are different?
Click to expand...

Same manufacturer. But you're right, it does not mean they are identical.
Meanwhile, the base cell is the same technology if I remember well.

I think GM opted for better, more precise diagnostics to identify faulty packs and only replace these ones.
G

Jslip said:
Any idea if this upgrade will include the cold weather DCFC in it? Or does it over write it? I never got the upgrade, but if I am bringing it in anyway...
Click to expand...

My Q also. There are threads elsewhere on this forum where the dealer has refused to apply the cold wx DCFC fix for free. I suspect they are totally separate fixes, and we may not automatically get the DCFC fix when we get the smoking battery fix. Anyone have more info on how that might work?

Joined 6 mo ago
·
193 Posts
20-NA-053 is the reference number I was given. My repurchase contact said since it's not recall connected I would have to talk to the dealer. I called my local dealer and they had no idea what I was talking about and would have to contact GM (or is it "gm"?) and get back to me. But it would not be free.
That was the other day and haven't heard anything.
C

Jerry Duke said:
20-NA-053 is the reference number I was given. My repurchase contact said since it's not recall connected I would have to talk to the dealer. I called my local dealer and they had no idea what I was talking about and would have to contact GM (or is it "gm"?) and get back to me. But it would not be free.
That was the other day and haven't heard anything.
Click to expand...