Joined 12 mo ago
·
129 Posts
Having this trailer allowed me to sell my van. The kids are older and the van really isn't needed any more. I was hanging on to the van mainly because I often have to move pinball machines. Other than the occasional pinball move or trip to the hardware store for something big, the van sat most of the last year after I bought the Bolt. I finally figured that it was time to get rid of the van and work something else out. With the van gone I love having the space back in the driveway, plus no more maintenance, insurance and property taxes on it. Now the only ICE vehicle I own is my daughter's car. I enjoyed giving the van's new owner all the extra oil, ATF, and power steering fluid I had on the shelf. Good riddance!

I used the Draw-Tite Class I hitch from CARiD. The've since dropped the price about $25 from when I ordered it. I went with this hitch because I liked the fact that the tongue weight limit is 200 lb. I also liked that it had angled brackets to prevent the receiver from bending down under load as I've seen people report that using a bike rack has bent some other hitches down. 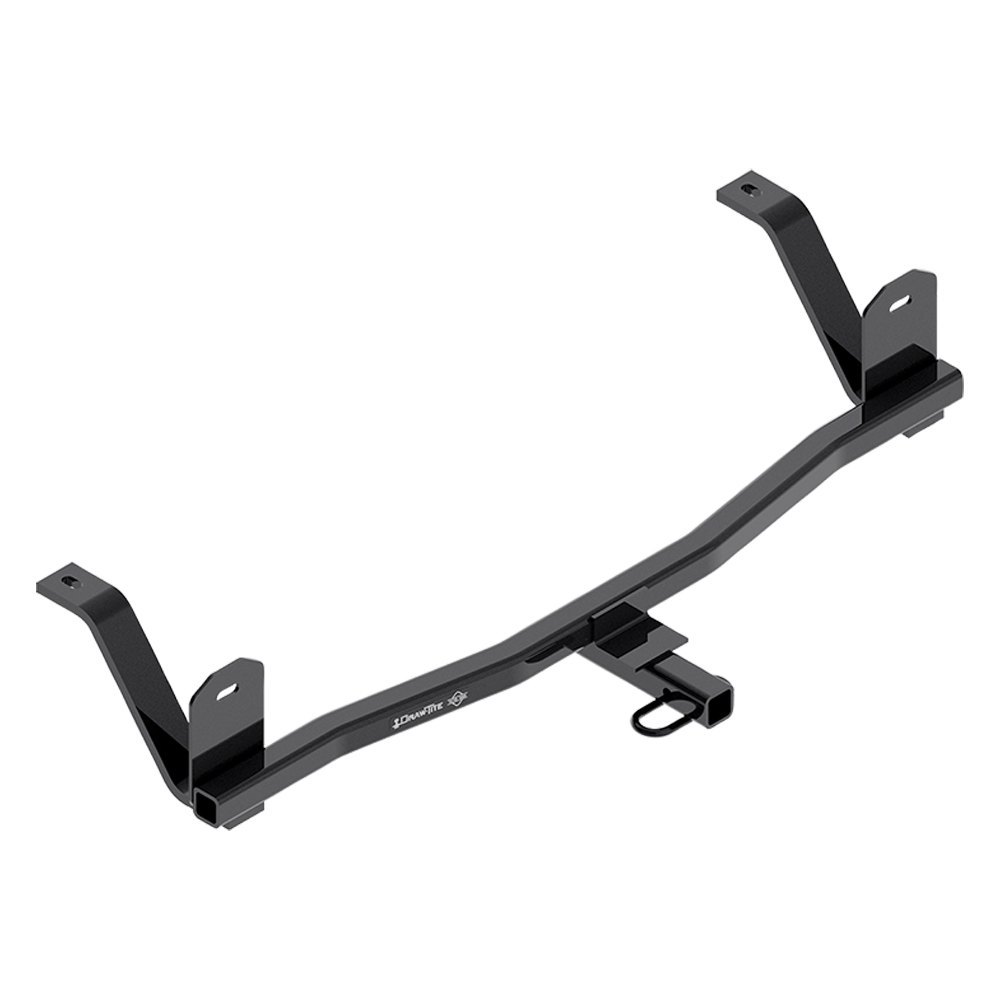 When using the Draw-Tite hitch you need 3 inches of rise to the ball.

I used the 1090 lb Haul-Master trailer from Harbor Freight, Item #62665. I needed something compact that I could store in my shop. I don't usually haul large items, so this little trailer fit the bill.

One thing I learned is since the Bolt has separate tail/brake/turn signals you need to use a converter and can't get by with simply splicing into the harness to run the lights on this trailer. This is due to the trailer having shared brake/turn/tail lights and not individual turn signal lights. I used a Hopkins #48895 converter from AutoZone, it was $25. The interesting thing is this converter does not need a separate 12v supply, just a connection to ground. This makes things easier since you don't have to tap into or run 12v back to the converter. It says it will work with both LED and incandescent lights. Who knows, it works, it was easy, it was at the store right down the street, and it was inexpensive.

I used jsftam's instructions to wire in the converter found here:

I have added a hitch and want to tow a kayak trailer. I've added the lighting converter for a few vehicles before, but I'm nervous about poking around for the required +12 and turn signal, brake (if separate from turn signals) and running lights. Anyone accomplished this and have advice...

www.chevybolt.org
Many thanks to him for making this much easier.

Some of the panel clips were a bear to get loose. I did break one clip mounting tab off the left side panel. And I had to re-bend the little teeth on several of the clips after removing the panels. I hope I never have to remove the panels again, I think the plastic is stressed enough after this removal that if I have to do it again more tabs might break off.

For removal of the side airbag, you slide the rear seat forward or remove it, loosen the lower airbag retaining nut (13 mm), then push up on the airbag and pull towards you.

My car is a Premier, so I had to remove the left side false floor bracket to get the lower left panel loose (two 10mm bolts).

The bed on this trailer is a little over 40" wide and is 48" long. This means you can make the deck from a 4x8 sheet of 3/4" plywood and have enough left over to make four side panels.

Below you can see the trailer with no side panels, this is how I'll transport pinball machines. I haven't put a game on it yet so I don't have a pic of that. My next venture is loading and strapping down a game to see how well that works. I can't foresee there being any problems.

Here it is with the removable side panels. I have the brackets installed so that I can cinch the sides together with carriage bolts and wing nuts to make everything secure, but easy to take apart. The side panels are pretty solid when everything is tightened down.

Here you can see it stored in my shop, side panels and all. Doesn't take up much space.
If you want to store this trailer on end like I'm doing you have to install the tail light brackets the other way around from how the instructions say. If you don't the lights will stick out behind the trailer and you can't set it up on its rear.


Finally, here's the Bolt with it ready to go.

I prefer 2” hitches since they cost about the same and allow heavier duty use. I also prefer 2” balls, but the stinking HF tongue is 1 7/8”. It’s the only thing I have that isn’t 2”.
S

redpoint5 said:
I prefer 2” hitches since they cost about the same and allow heavier duty use. I also prefer 2” balls, but the stinking HF tongue is 1 7/8”. It’s the only thing I have that isn’t 2”.
Click to expand...

I'm in the opposite situation. I don't own anything else or haul anything else, so this 1-7/8 hitch is all I have. So no big deal. But I can see it being a PITA if you had to swap things around just for it.

Joined Sep 2, 2019
·
405 Posts
Looks great and you got it all done at low cost. Good job! I've also been thinking about that Harbor Freight trailer. I've been hanging on to a small 4x4 pickup for general hauling, but I'd like to get rid of it. Like your van, mine mostly sits on the street. On occasion I do have use for being able to haul 8' lumber, compost, yard trimmings, or other bulky items, but I was thinking that just letting the lumber extend 2 feet forward and 2 feet back off that trailer might work just fine. I'd likely build a small wheeled dolly to allow the trailer to be easily moved in the garage in the upright "stored" position. I already have a class 2 hitch with 1-7/8" ball along with a 4-pin trailer wiring hookup, so I just need to convince myself that I don't need the 4x4 anymore. My class 2 hitch is good for 200 lbs tongue weight and 2000 trailer weight, so no problems there. I wouldn't want to try anything heavier with my Bolt.
S

sly said:
I'd likely build a small wheeled dolly to allow the trailer to be easily moved in the garage in the upright "stored" position.
Click to expand...

This trailer is so light and balanced that you don't need anything to move it around and put it on end. You can just wheel it into place and stand it up.

One thing I need to add to my original post is if you want to set it on end you have to install the tail light brackets the other way around. If you install them as in the instructions the lights stick out behind the trailer and you can't put it on its end.

Like you, I figure if I need to haul longer stuff I'll just let it overhang a little. But you can fit 8' pieces of lumber in the Bolt if need be.
2

You can get a 2" replacement for the tongue at like Tractor Supply or eTrailer. Fairly cheap, I think - like $25. When I bought my boat used, we tried putting it on the hitch and found that the clamp on the tongue was bent & wouldn't close. So the guy I was buying the boat from drove with me over to Tractor Supply and bought a new tongue thingy for it. We just unbolted the old/bad one and bolted the new one on.

Joined May 24, 2019
·
351 Posts
Absolutely awesome. I was literally looking at this exact trailer not 10 minutes ago. I built a little 4-wheeler for my kids and putting it on the rear cargo rack is a little bit crazy...

Good show. I used the tekonsha module for my lights for my boat trailer, it wires up (total pain) in the inside trunk behind the light on the driver's side. I just hang the wire out the lift gate when I tow. But you're already past that point.
S

Joined 12 mo ago
·
129 Posts
Did a test today, it worked great. The game is nice and secure and doesn't move at all on the trailer. I only took it down the street so no highway speeds, but it seemed to be well balanced and rode fine. It was easy to load/unload and strap down. Backing up is going to take some practice, but I did manage to back it into the driveway twice. I'm not fast though, I have to think about it, it isn't second nature yet.

PLP said:
The problem is finding a 2" coupler for HB trailers that will fit the holes...
Click to expand...

Yeah, I didn't find one when I looked briefly. I don't know why there is even an option that is so close in size to 2". Can only create accidents.
1 - 11 of 11 Posts
Join the discussion
Continue with Facebook
Continue with Google
or sign up with email
About this Discussion
10 Replies
6 Participants
Last post:
redpoint5 5 d ago
Chevy Bolt EV Forum
We’re the Largest Chevy Bolt EV Online Community and Owner's Club. Join to discuss sport mode, reviews, battery range and charging!
Full Forum Listing
Explore Our Forums
2017+ Chevy Bolt EV General Discussion Forum Charging and Batteries 2017+ Chevy Bolt EV Issues And Problems New Member Introductions Charging Stations Discussion
Recommended Communities